Hi friends! Happy Saturday! I wanted to stop by and share some fun we had for Valentine’s Day! I know it’s a little late for this year, but hopefully these ideas will be of help to you next year! 🙂
A few weeks ago, I wrote all about preparing for your party! If you can’t tell, I seriously LOVE Valentine’s Day!! You can read that here!
Now for some details on the fun we had! The day of our party was also I Love My Job Day. it’s our version of Career Day and the kiddos love it. But we don’t have a ton of time before the party, so I spread some of our activities throughout the week. We usually did 1 fun thing each afternoon. It worked out perfectly that it was on a Friday…I’m just not sure I could handle it any other day haa! We read one of our favorite Valentine’s read-alouds…A Crankenstein Valentine. Then we did a little directed drawing. I LOVE how they turned out! I found this little pack at Target and knew it would be a perfect way to practice fine motor and get some writing in during Valentine’s week! It was a little harder than I thought for some of my friends, but it was great practice and they were SO engaged even if it was hard for them. Then they did a little writing about the person they had created. I wanted to make sure they were actually practicing important skills so their story had to have characters, setting, a problem, and a solution. We spent lots of time making Valentine’s for people NOT in our room. I knew they would be sharing Valentine’s during our party, so I wanted them to spend some time making some for their family, our librarian, cafeteria staff, etc.

I had lots of supplies for them from Target for them to use! 🙂 I did let them use glitter…I’m not really sure why. It just kind of happened. They asked and I said okay and then THIS happened. My favorite thing is letting them have complete control over their projects. It can be scary (and MESSY) but their little hearts always come out so much more than when I tell them exactly what to do. For our party, we had lots of fun snacks! I had parents come in and help get it all set up while I had my lunch break! Most of them had never had chocolate covered fruit and it was so precious. We just melted some almond bark in a crockpot (with a liner…don’t forget this step or you will hate me forever.) I did put out some cheese later cause you know…#balance. Here’s the gifts I gave them. A little note and a baggie of candy and silly putty. I know that a lot of schools ask for non-candy treats. This year I decided to just go the traditional route, but there are SO many non-food ideas!
You can get the free gift note here. I hope you have an amazing Valentine’s Day with your sweet kiddos! 🙂 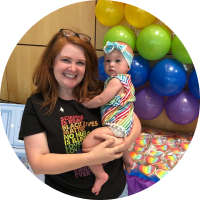